Had to throw in a post about the marvelous time(s) I had this week, partly due to my first Birthday in New York, and partly due to the visitation of Pete’s in-laws (or two out of the four). My Birthday was the 24th; Pete & I celebrated that Tuesday evening with a sushi feast (we hadn’t really had one since first coming to NY last year). Mmmm…nothing like good unagi! We went to a place called Marumi near the NYU campus. Really good sushi at very decent prices. Wednesday night was the first double-treat by the in-laws, Bill and Janet. They always take a trip to New York each year with their friends Bud and Judy and go to as many good restaurants and Broadway shows as possible. Thus, they were able to treat Pete and I to a few delicious and theatrical splurges this week. On Monday night they had already taken us to Gallagher’s Steak House right near their hotel, where I ate a steak the size of a frizbee. On Wednesday night, the treats were the famous Sardi’s Restaurant coupled with the show August: Osage County. Sardi’s was really great, and I of course loved the decor of theater star caricatures. 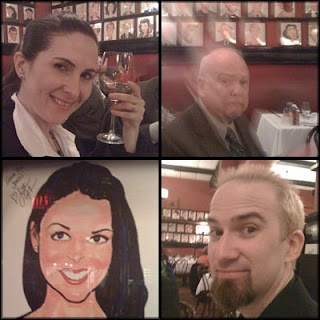 August: Osage County was fantastic, but painfully so. It seemed a soap opera script of a story, but so well done that one cannot help but be reminded that such family structures, lies, and hidden pain does exist in the world. The dialogue was witty, and all the acting was spot on. The audience was indeed enthralled with the ins and outs and twists and turns of the plot and reveals. It’s not the type of story for everyone, but more than a few gasps and groans came from the audience as more and more of this family’s history was cracked open for us to see. Pete actually bought a signed script (the money and all donations collected at the door went to Broadway Cares: Equity Fights Aids). Walking out of the theater, I remarked that the play certainly made me feel a hell of a lot better about any problems my family might be having. Although the show is “wonderfully painful” to watch, it certainly gives one pause for re-appreciating one’s own familial situation. After August, we went back to Sardi’s for a Bill & Janet tradition: dessert and Apricot Sours (a Sardi’s original).

Thursday night, after my day of work, Pete and I relaxed a bit, then jumped online and on mic to record a podcast of www.check12check12.com, hosted by CK. It was a lot of fun, and gave Pete & I an excuse just to hang out and talk with online friends. CK edited about 3 hours of talk into 2 hours of talk! Find this night’s episode, #84, here…and you can find our previous episode, #82, here.

Friday night was incredibly fun. We all once again went out to dinner, this time at Patsy’s, one of Frank Sinatra’s favorite Italian restaurants in New York. While at dinner, Janet regaled us with their afternoon adventure, where they saw Tony Bennett sit at a table near them during Brunch. (Damn, and all I’ve seen is Lewis Black walking down the street in Hell’s Kitchen!)

The after-dinner show was the Tony-award winning In The Heights, a show I had been wanting to see for ages. I was particularly excited to see it because Javier Muñoz, who had understudied the role of Usnavi for ages and who had done the staged reading of Runway 69 with me last year, had taken over the role a month ago. It’s so thrilling to see a guy you work with take the stage over in a Broadway show. And he was fantastic…the show brilliant…and made me appreciate my new home of Washington Heights all the more. In fact, the setting is placed on the street near 181st street on the A train…my stop is one more north of this one. I’m glad I got more acquainted with the area before seeing the show; there were a lot of references to places, concepts and jokes that I might not have gotten had I seen the show right after moving. I got the line about the 9 train not running anymore, and I instantly recognized the huge Washington Bridge rising behind the set. The soundtrack is really pulsing, both theatrical and incredibly down to earth, the lyrics heartfelt, and the characters both funny and real. I really appreciated this show for the mere fact that there are NO villains in it, no “bad” people, no one person trying to destroy the other. Everyone had individual desires and purpose; it was more about the struggle to converse with one’s own inner demons and trying to fit in with other people’s expectations of the world and within the confines of society at large that created the conflict of the show. There were latin stereotypes, to be sure, but no one had a hidden agenda that made him or her an “unbelievable” character. It was refreshing to want to root for everyone on stage, and to not be faced by ugly, stereotypical villains commonly seen on the “New York street scenes” of theater and film.

After the show, I was able to take Pete, Janet and Bill backstage to meet Javier! We literally walked across the stage – my first time on a Broadway stage! Pete pointed out – and meet Javier in his dressing room. He is such a sweetheart, and he projects positive energy and grace. He was just getting used to the dressing room and was still in the midst of arranging himself within it, but was so thrilled by his new situation. 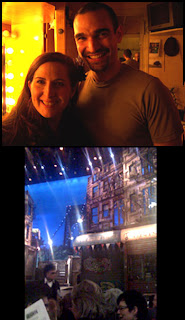 Top: Javier Munoz and myself. Bottom: the set of In the Heights and audience

On Saturday the 28th, I had a group Birthday dinner. I originally wanted to go to Cowgirl, but they were fully overbooked. I then went with John’s Pizzeria near Times Square. Food was good, beer was good, friends came and went throughout the evening. Jay the Pal also joined in, and got rambunctious with the ladies, too! Problems included waiting 1 1/2 hours for a table (although I was waiting to get a spot way before guests arrive) and the room itself was quite loud and hard to talk through. Next year, I’ll find someplace quiet and intimate for my group. For dessert, we enjoyed Pinkberry, which was right around the corner. Tried the Pomegranate flavor and was ridiculed by friend Rodrigo (who prefers Red Mango to Pinkberry). 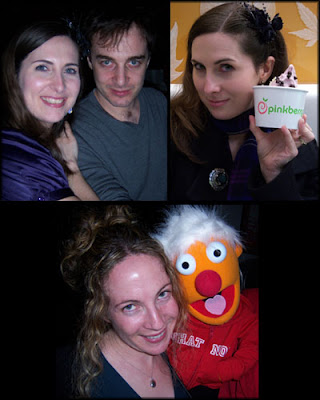 Top Left: Myself and a stern-looking Gabe. Top Right: Myself and Pinkberry, my other love. Bottom: Becca and new pal Jay!

Okay…whew…we got to Saturday. SUNDAY I split between a convention, rehearsal, performance, and dessert:

First up was The Film, Stage & Showbiz Expo, a yearly convention for a huge number of events, panels, classes, exhibitors, and free stuff. I had signed up for the Los Angeles one but couldn’t at the time, and I signed up for the New York version with every intent not to miss it. So, I went for an hour and a half – meeting up with my friend Mark – and did a quick walkthru, collecting brochures, informative postcards, and signing up for raffles (haven’t won anything yet). In the interest of being a team player for the entertainment industry, here’s some URL’s of companies I will look into for possible career aid/help/marketing material (however, I do not endorse them as viable products…this remains to be seen!):

So, after the Showbiz Expo, I went to my first rehearsal for “Ruddigore,” met the cast for the first time as well as my co-star puppet, Mathilda. Afterwards, I ran over to the Algonquin Salon to sing for my in-laws, who had gone there ahead of time with Pete to enjoy the open mic for the first time. As they are big Sondheim fans, I sang “Children will Listen” from Into the Woods. Pete recorded it; I will blog about it and post it HERE soon.

Afterwards, we went to Carnegie Deli for basically a really late dinner/early dessert. I had the strawberry cheesecake, and we went home with leftover pastrami sandwich and potato latkes. We love leftovers from really good restaurants! Bill and Janet left the following morning, back to Palo Alto, and Pete & I were left with a pretty regular schedule (plus rehearsals) for the week. Above: the massive strawberry cheesecake, with Pete’s thumb for scale. Had to take 1/2 home in a doggie box!

Thanks go to Bill & Janet for a marvelous series of
restaurants and shows this past week!
blog

Some “How-To Guides” from Backstage.com