As previously blogged, this past week has been a piling on of culture, food and family.  Here I continue the adventures of Week 1!!!

Sunday the 10th, after teaching drama in the morning, I brought my empty stomach to meet up with Bill & Janet & Pete – along with friends Bud and Judy – at the Waldorf-Astoria, a famous hotel with an equally infamous Sunday brunch.  We ate in the Peacock room, drank mimosas, ate caviar, lobster, salmon lox (in three different flavors), oysters, bacon, deviled eggs, gold-leaf-covered chocolate cake, chocolate fondue fruit, and nips and tastes from other’s plates.  It was decadent, and we were so full by the end. 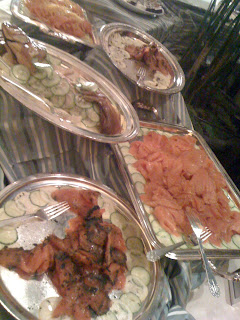 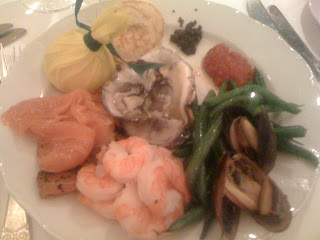 We took a moment to take some pictures in front of the famous wall paintings that give the Peacock room it’s name, then walked out in to the lobby, which features a 2nd tier area where people enjoyed sitting and waiting.  I noticed a beautiful piano on this tier area, and excused myself to go investigate – in famous hotels, it’s likely the pianos and other musical instruments on display have a history or at least a famous story attached to them.  Boy, was I RIGHT in this case – this piano turns out to have been owned by Cole Porter himself, and many gorgeous melodies and songs were composed on this very piano.  I got a picture of myself sitting there…it was such a beautiful find!

We crashed for an hour at Bill & Janet’s hotel, then I had to leave to meet up with Mary Liz McNamara, a composer who was presenting a song the next day at BMI.  We rehearsed her song (written for her show The Good Girl), then I dashed uptown yet again to go to The Salon, my regular Sunday night open mic event, for which I blog.  Bill, Janet and Pete were in attendance, and I sang with Brian Allan Hobbs on one of his original compositions (with lyrics by Colin Ebeling and Kristin Hanggi) entitled “Gimme A Loser.” I also later sang Huey Lewis & The News’ “The Power of Love.”  You can read about the rest of the singers and the co-host Roger Mapes in this blog entry.
The next day was pretty uneventful, EXCEPT for singing at BMI Musical Theater Workshop, located right in 7 World Trade Center, on behalf of Mary Liz McNamara.  It is such a thrill to sing at BMI, since the master class is made up of some of the best up and coming (and indeed, current) composers and lyricists in musical theater.  Some were writing for stage, others were writing for musical theater web series, and this afternoon it was run by Grey Gardens lyricist Michael Korie – it was great to meet him.  The class adds praise and constructive criticism to each presented song – these crafters of song are able to critique clearly, succinctly, without overt emotion or judgment, and it was so neat to see the writers take notes and criticism from their peers professionally and with a good sense of logic and self.  As a singer who often performs original works, it was also a lesson in analyzing new songs and supporting the songwriter with solutions to the structural, thematic, or character issues within a song.  My mind is always blown at the sheer number of choices a writer has to make, and on Monday I was taught so many concepts just by sitting and listening.
On Tuesday, the food attack resumed.  We met Bill, Janet, Bud & Judy at Norma’s, which is one of their favorite breakfast spots.  Pete had an amazing chocolate/peanut butter waffle, and I enjoyed eggs benedict a la artichoke.

We split for the day, taking our computers to a Starbucks to hang out for a while and work, then we met up at Theater favorite Sardi’s.  I had some crab cakes, nummy!  Then we went across Broadway to see the revival of Anything Goes, starring Sutton Foster and Joel Gray.  Oh man, this show didn’t disappoint: although the script is still a bit dated, the cast kept the show lively and Cole Porter’s music is still snappy, romantic, and brilliant.  Sutton Foster proved to me why her career is strong and vibrant: she sang, sashayed, tapped, kicked, belted, and sassed her way through the role of Reno brilliantly.  Joel Gray proved to me why he is still a King of Broadway character actors – his sweetly devilish Moon was funny and crafted extremely well.  The overall cast was great, and although I felt like the romance between the male and female romantic leads was a bit cookie cutter, I was rooting for everyone to get to a happy ending.

The next day was an odd creative whiplash – dinner at Bistecca Fiorentina on 46th street (Pete & I shared the seafood dinner for two…it was two-tiered), then we went to the antithesis of Anything Goes…THE BOOK OF MORMON!!! Oh man, talk about “good writers too who once knew better words now only use four-letter words writing prose…Anything Goes.”  I bet Cole Porter himself would laugh his ass off at this Trey Parker/Matt Stone/Robert Lopez show, which is full of religious criticism, joy, sass, enthusiasm, waaaaaay gay tap dancing, parodies of musical theater, commentary on third-world poverty and AIDS issues, and yet had a sweet message of the power of faith to help a society gain power and strength.  If you’ve seen South Park or Team America, you’ll have a sense of the political humor and commentary that Parker & Stone always mix in, and Lopez’s music and harmonies are fun, rockin’ and sendoffs of classic musical theater. It’s as far away from Anything Goes, but it still stands up to the American musical theater tradition!  The cast is great (a great mix of clean-cut white males and an African-American male/female ensemble…not a role in it for me!) and I recognized Josh Gad from his stints on The Daily Show as a “correspondent.” Plus, it has so many science fiction and fantasy references, the scifi geek in my was tickled pink. It’s not the perfect musical, but we had a blast. We were also excited to sit one row behind Garry Marshall and one row in front of Rosie O’Donnell (and we saw Kate Winslet outside the box office on her cell phone).  Apparently, Norman Lear, Vanessa Williams and Joanne Woodward were also in attendance last night.  Talk about celebrity sightings!

And by the way, I need a t-shirt that plainly says “HASA DIGA EEBOWAI.”

After The Book of Mormon, we went out for cheesecake at Junior’s, and let me tell you – get the chocolate mousse cheesecake like Pete did (amazing!), but the sugar free cheesecake that I ordered is nothing to sneeze at too. And now I’m caught up one week later – tonight we have another dinner and another show, which I will blog about (in addition to the rest of the week) as soon as the week is done being experienced!