Oh boy, do I have some catchup blogging work to do! I’ll start at the beginning and work my way forwards in time.

I have continued going to open mics in New York, particularly Big Night Out at the Broadway Baby Bistro on Wednesday nights (going there tomorrow) and the Algonquin Salon at the (yup!) Algonquin Hotel on Monday nights. The Salon has moved from the snug and warm Oak Room to the lobby (the Salon’s original location), which is roomier but louder due to foot traffic and the lovely Grandfather clock in the middle of the room which always wants to add its voice to the mix every hour. But Mark Janas has returned from Hawaii to play piano, and his talent is quite a sight to hear…or something like that. Sight-reads like a mo-fo and can reinterpret any song you put in front of him to your liking.

I have continued to go on auditions for shows, although a lot of my time has been on the thought process of revamping my one-woman show of last year. Lunch with an old friend from UCLA (in that case, we’re both old) brought up the subject of Producing (my friend looked at me in the middle of a conversation and said “Are you a producer? You talk like you’re a producer.” I sort of brushed off his comment with some feigned modesty, but after thinking a bit, I must admit I do have a producer’s mind sometimes. Thinking perhaps of shooting for a late Winter/early Spring show, February or March or something. We’ll see!

So, Labor Day came & went. I rehearsed a bit of the day with friend/composer Brian Hobbs on three of his compositions, then performed them the next day at BMI for their musical theater workshop. It was odd to perform for a long table of people, their heads mostly buried in copies of photocopied sheet music, as I sang. But their heads bobbed along pleasantly as I sang, so I just enjoyed myself. This was Tuesday, and by Saturday I read on Brian’s Facebook status that he was looking forward to starting the workshop in 2 week’s time. Yay!

At the Algonquin Salon open mic, the theme (an inspirational word or phrase that spikes the imagination when choosing a song to sing) was “Home.” I came in with one of my favorite home-themed songs, “A Quiet Night at Home” from “bare.” I hadn’t sung that song with a live piano for about 8 years, and it felt good to get into Nadia’s mindset for the song once again, sitting on a short stool/chair and letting the chubby High School girl take over my physicalization. After singing, I got a lot of great feedback from my peers, and a lot of “Wow, that was great. What is that song from???” ‘Course, I told ’em. 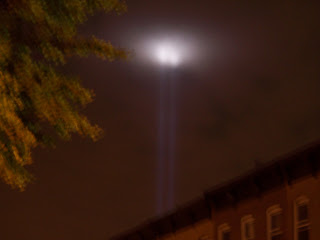 For myself, the first anniversary of 9/11 in New York& as a New York resident. Not much was seen on the outside as people busily rushed from one place to the other on the streets of NY. However, all TV channels showed the reading of the 3,000+ names. Also, many Subway train posters featured advertisements for funds on behalf of families of the 9/11 victims, as well as health provisions for people suffering from breathing problems in the last 7 years (from the concrete dust in the air). There was nothing I could compare these posters to in my life. No one huge “event” that I can think of to connect to an entire city-wide collection of strangers. But I did feel, walking around, that there was a respectful glaze in the air, and that many of the strangers walking around me had a loved one or a friend in on their mind that day.

But, the day was not only remembrances and mourning. My sister, Lisa Rein, came in from San Francisco, crashed at our place, and then traveled with my husband to Tillie’s Coffee Shop in Brooklyn for her New York debut. Lisa is a singer/songwriter/guitarist, which means she has two more talents than I.

We sang for a large crowd on Thursday at an open mic, so we got to hear others sing as well as show off our own work. I sang backup on two songs, “Running By” and “FaceTwit.” Then, on Friday we returned to Tillie’s to sing at an extended set, called “Seven Sessions” where we sang the same two songs, plus Lisa sang solo on a few more. We also sat down with the host of the evening for a recorded interview, during which Nick asked Lisa about her music and creative commons projects.

We all went out for sushi and drinks (cucumber sake anyone?). Lisa’s good friend Spot had seen the show and came along – he’s a digital artist/teacher who renders digital paintings made by “Electric Sheep, a cyborg mind composed of 60,000 computers and people mediated by a genetic algorithm.” Not sure how it all works, but the screensaver is really cool.

After reading about it in the latest issue of Time Out Magazine, I had 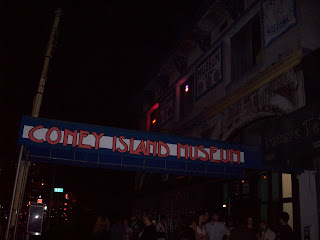 suggested to Lisa & Pete that we go to the Coney Island Museum to see a screening of “The Cabinet of Dr. Caligari.” None of us had been to Coney Island, although we had heard about the closing of many of the amusements there this past year. We took the D train all the way down to South Brooklyn and got out at the last stop, Coney Island. It was about 8pm, nighttime, and we could smell the salt air as soon as we got out. I could tell it was a touristy-type area, filled with Carnival lights and souvenir stores. But, seeing the Cyclone in the distance was great, as well as the outside of the museum itself. Pete & I will plan to make it back to Coney Island during the day, especially for the chance to see the Atlantic Ocean for the first time as New York residents. 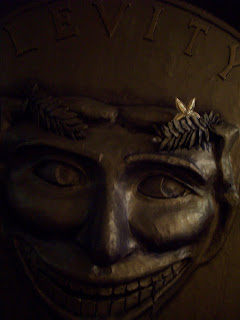 itself. Wooden chairs laid out rows created the audience, surrounded by funhouse mirrors, old bumper cars, Coney Island memorabilia and old poster/photos. The screen itself was a portable screen, projected from a DVD player. Before the show, we were given free cups of popcorn, and while we watched old-fashioned cartoons and pre-show entertainment, Lisa bought some fried cheese sticks and beer. It was all very low-rez entertainment, but for $5 a ticket to see a silent classic on a large screen with an audience, free popcorn, and live piano music accompaniment, I’d say it was a deal. 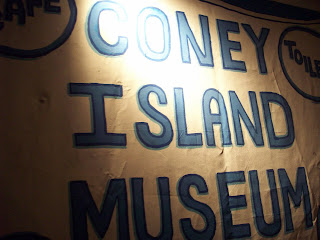 The screening was fantastic. I remembered the charm and creepiness of “Caligari” and how cool it was to watch a film classic like this. However, it was an added bonus to watch it with a large group of people (all quietly appreciative, by the way) with a great live pianist accompaniment. He played a jazzy soundtrack, making creepy strums of the piano wires themselves at appropriate times. When Caligari rings his large “audience grabbing” bell, a real bell was rung. Plus, at a particularly tense moment, the pianist let out a big “aaaah!” when the character on screen let out a yelp. It was all good, clean, truly old-fashioned fun. I had a moment watching the groups of extras wander through the carnival on screen, marveling at the fact that I was looking at the preserved images of people long dead. People who probably had little idea that 100-odd years later, audience members would still appreciate their work. That’s the kind of art that lasts!!! 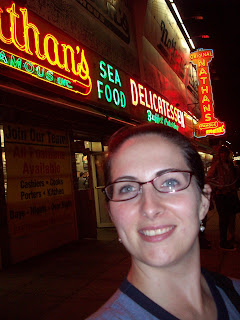 After the show, we went to the original “mother ship” store for Nathan’s Hot Dogs, only a block away from the museum. I had a regular hot dog with grilled onion, Lisa opted for some chicken tenders, and Pete had one with bacon and cheese. We ate on the way to the station, then took the long train(s) ride(s) back to upper Manhattan.

All in all, a great experience. A bit on the shady side, but a reminder that people had entertainment back in the “olden days” of the early 20th century. 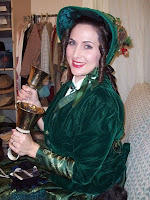 I took a break from family and headed down to Wall Street area (ha, before the dark Monday of bank crashes the next day) to audition for the Definitely Dickens Holiday Carolers of New York, the NY branch of the group I sang with last year. It was chill to sing the same arrangements with total strangers, and to also sing next to my friend Vanessa for the first time in about 13 years (we did musical theater and a cappella at UCLA). Happy to say they accepted me into the group quickly, so expect me to be a part of this caroling group on the East Coast this time!

On Monday, I was able to show both my sister and my husband the Algonquin Salon. Lisa & I sang “Running By” and I grabbed the old chestnut “With Every Breath I Take.” It was cool to show them the venue I had been going to for months, so at least they could learn where I go to every Monday night 🙂

Lisa left on Tuesday, and I continue on…more to come, and less time in between blog posts, I swear!

What I Wanna Know: What do the Lamb and the Lion Think??