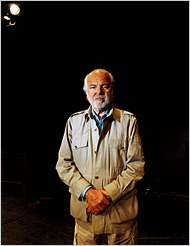 I didn’t know Milton personally, but I saw him teach, asked him questions when I could, read his Acting Class and Dreams Into Action books, and saw the change he instilled in others. Thus, I understand Milton Katselas by this research to be an incredibly unique and powerfully wise man. He was not without his controversy (his links to Scientology turned some people off), but I never felt these conflicted with the incredible amount of acting and life-teaching advice he had for us as students. His corporeal presence will certainly be missed by acting, directing, and other creative people around the world, but his wisdom will be a permanent fixture and a constant reminder of how we can all improve both creatively and personally.

Not to sound like an Amazon salesman, but anyone interested in reading his work can read his newly-published acting book Acting Class: Take A Seat or his book on achieving goals Dreams Into Action – the audio version is also available on cassette, and his May 1997 2-day seminar on cassette as well.

New Video: Marquee Five at The Salon “The Travel and Weather Together” Medley, April 25, 2010

March 18, 2010
« Previous post
Catching Up On Some Cabaret
Next post »
Show to See: “Putting Things Away” with Raissa Katona Bennett